One thing I tried: We started the process of co-creating our units for the semester in week one. Some basics about my class set up can be found here. I tried to keep this simple based on a conversation we got to have with Allison Zmuda on August 8 and this resource she shared. Her vision of personalized learning is to gradually move from teacher-generated to student-generated within 7 specific areas (see: “Orchestrating the Move to Student-Driven Learning”). I’m tackling “inquiry and idea generation” this year, hoping that by giving students more ownership over what we study and why that it will increase their engagement in HS English. Here’s how I started to dip my toe in:

1. I had students complete a simple google form (What should we study together) where they rated their interest level in potential unit topics. I felt like mapping out some topics together was an easy first step. I know we’re going to study argument, read a play in their book clubs, etc., but there are any number of ways to go about this. My goal is for them to feel some ownership over what topics will drive the readings and discussions and to set the stage that they would have a voice in creating the course. I brainstormed topics based on previous classes and some that I already had resources for or felt like could be broadened enough to encompass several ideas. The survey asked them to rate their interest level in each topic, then to add any potential topics that they felt weren’t addressed. 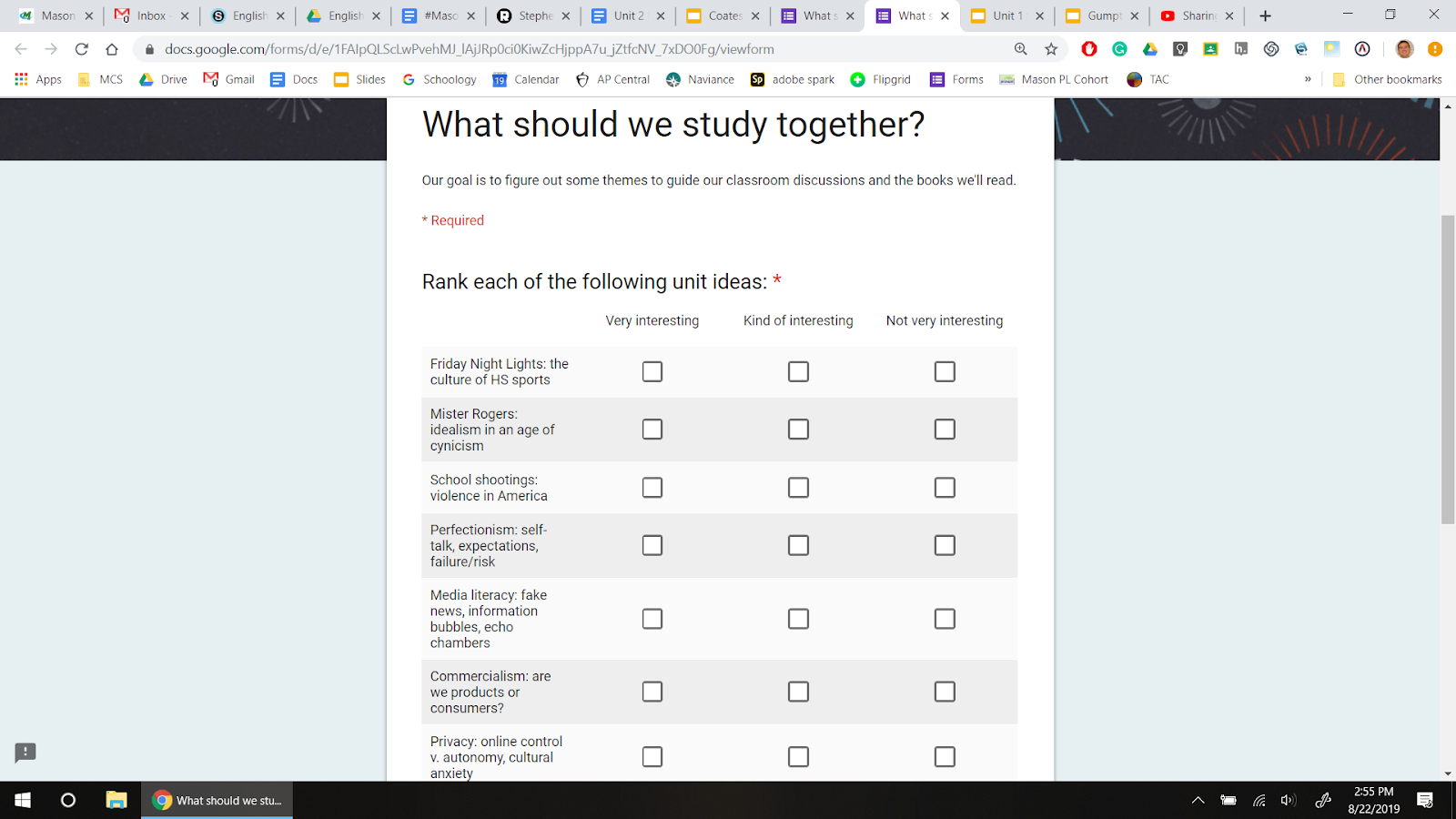 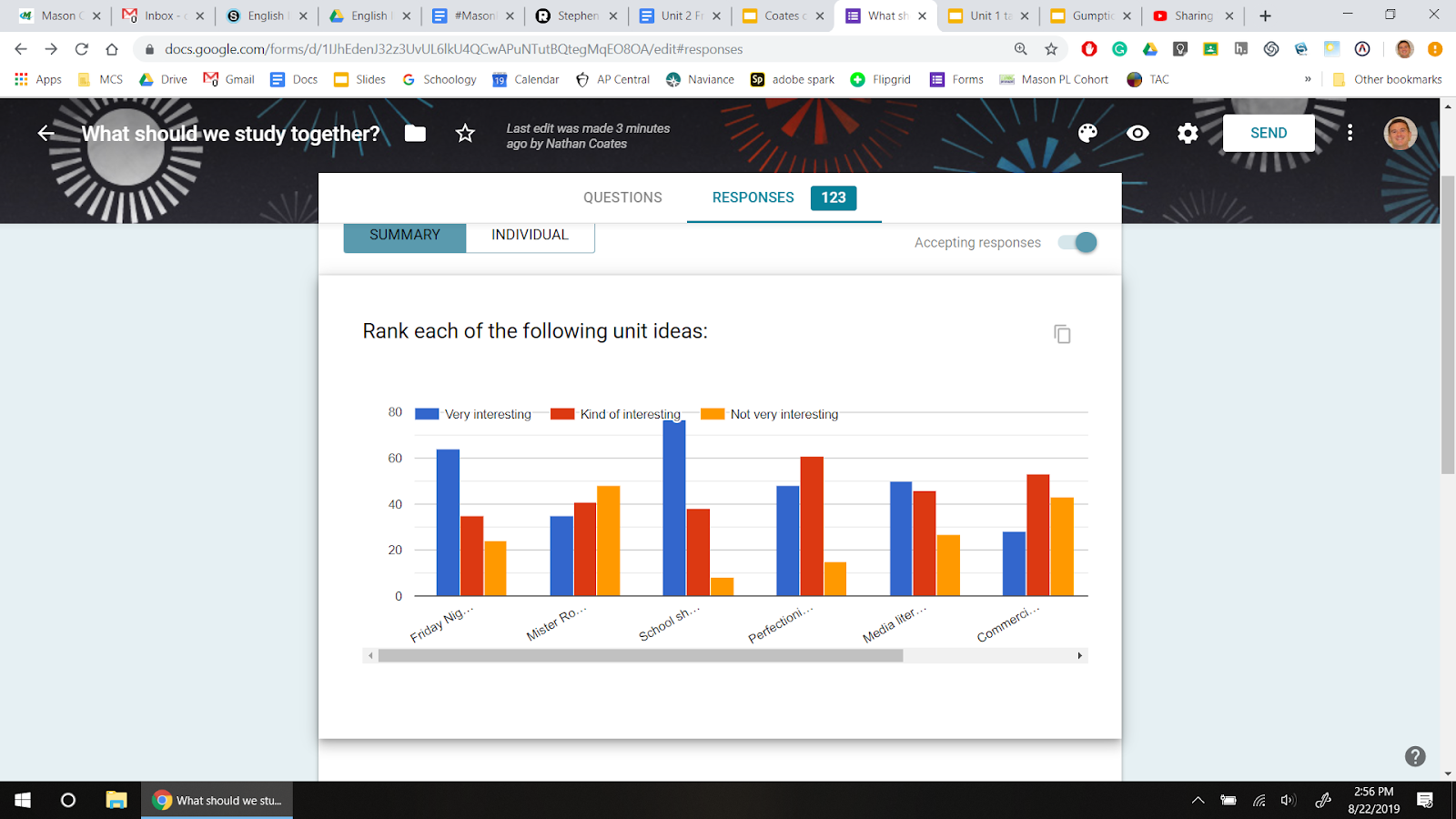 The google form makes it easy to gage interest level, and below are examples of some student-generated topics. This helped me broaden the School Shooting unit, which garnered the most interest above, to Violence so that it might include police shootings and video game violence, which students repeatedly mentioned in the comments. So the end unit idea became Violence in America: school shootings, police shootings, and video game violence. This will give us three specific directions or pathways that students can pursue in their reading. 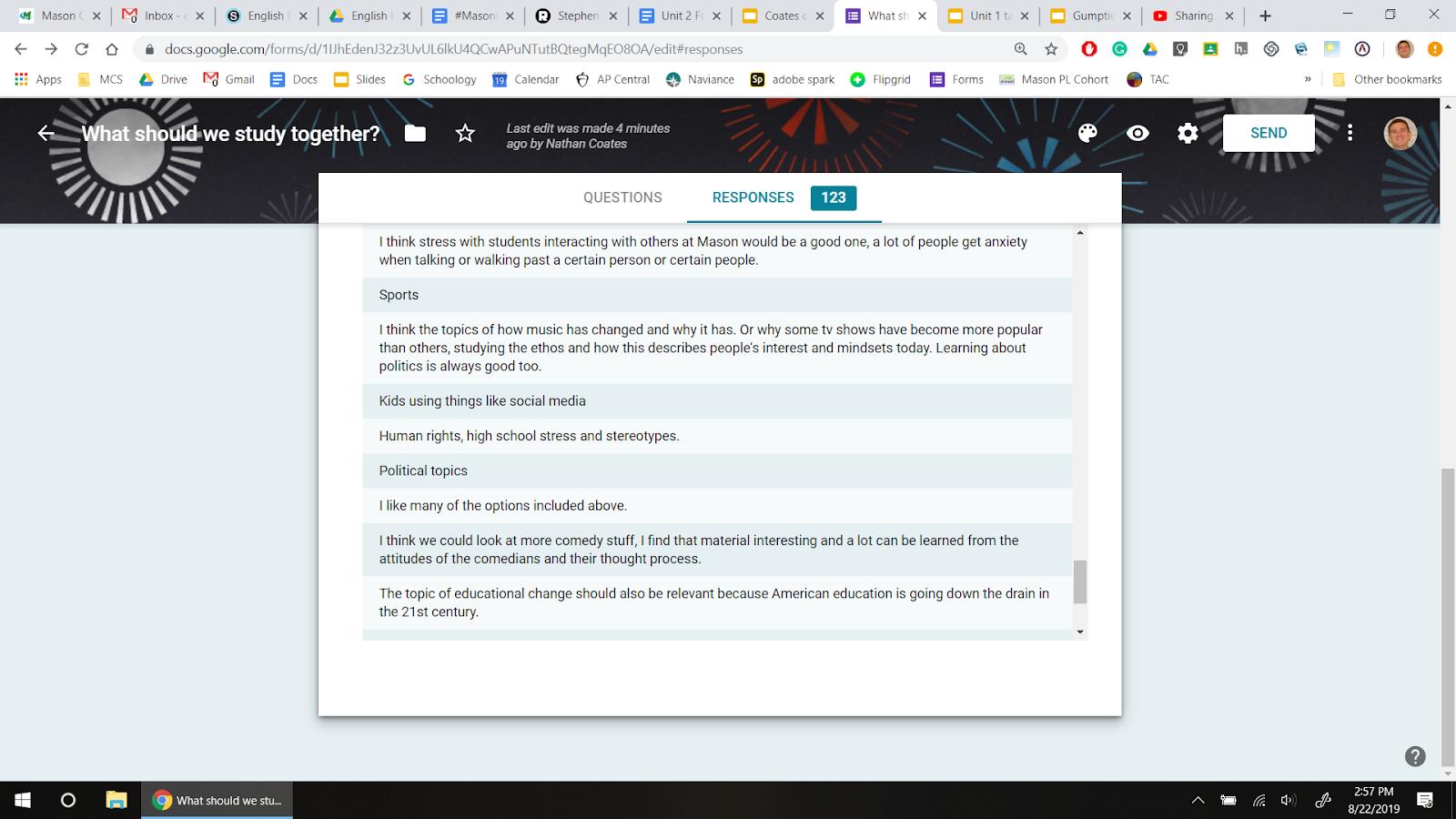 2. I took their interest ratings plus their comments and ended up with three unit ideas:

Now I can plan the order so that it coincides with our calendar (Friday Night Lights in the fall), our curriculum goals, and my own comfort levels with building some things on the fly. It’s hard to wait until this point in the year to know the unit topics (I’d usually have the entire year mapped out), but I built in a 2-3 week buffer unit to get the year started so I have a little time to get things squared away.

3. After the survey, I showed them which three had the highest interest levels (Friday Night Lights, School Shootings, Perfectionism) and asked for any book recommendations they had for each unit. Below are some of their recs. 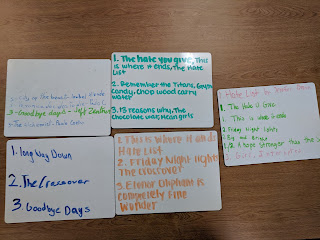 What I liked/what I’d change: This added flexibility to the course design and hopefully sets the tone that I value their voice and choice. It’s still not fully student-generated, but I think it is much less teacher-generated than past years. The goals and standards for reading and writing are still the steady spine of the units, but hopefully the way in which we access them will be more relevant. I worry a little that mapping the entire semester’s topics still boxes us in a little bit (or at least that it might make me less spontaneous), but for now it’s a starting point.

What’s next: Now that we have a rough map of topics for the first semester, we will take some time to build some essential questions for unit 2 (using Grant Wiggins’ Understanding by Design models). Then, maybe for unit 4, I want to begin working with them on how to pair up the curriculum goals and standards with potential assessments. I’m hoping that once we complete a couple of units that it will generate more ideas for topics and essential questions.

Nathan Coates is an English/Language Arts Teacher at Wm. Mason High School. This article is cross-posted with Mr. Coates' personal reflection blog. You can view his blog here. Twitter: @MHSCoates

View all posts by Nathan Coates →

My Journey Into Creating A Design Challenge